Carpophore of extraordinary dimensions, it is common to reach 50 cm in width, with a projection of more than 25 cm, and a thickness of 10 cm. It has a console or semicircular shape and is flat, but its surface is covered by a kind of concentric grooves, and it bulges or dents irregularly. It also has a lacquered coating that can be up to half a centimeter thick, which gives it a reddish-brown color; over time, it turns dark brown. During the growth phase, the brim of the hat is whitish, but when it stops growing, it becomes the same color as the rest.

Hymenium formed by several layers of tubes arranged in layers because the carpophore is perennial, but the tubes are renewed annually, forming a layer of meat that accurately separates the tubes each year. These tubes are long, more than 1cm, remaining reddish-brown, while the pores are very small and rounded, 5 to 7 per mm, young white, then colorless.

Suberose meat, with a consistency similar to cork or to the wood itself, less thick than it might seem, brown in color, usually has some whitish inlays typical of this species.

Habitat:
It bears fruit on the wood of deciduous trees, especially oaks and beech, and can behave in a parasitic or saprophytic way. Since it is perennial carpophores, it is obvious that it can be found at any time of the year, is a frequent species in our forests.

Observations:
This mushroom is characterized by its large size, its flattened shape, and the white inlays in the meat, among other things. To give you an idea of ​​its dimensions, in the 90s, when we went to mycological contests, we had a Ganoderma applanatum that we had to put in the van among several people. The Ganoderma adpersum is very similar, but its bark is twice as thick as this, not having such a flattened shape, the Ganoderma pfeifferi differs in that it has no separation layer between the various layers of tubes.

The magic of Ganoderma applanatum growing wild in Ireland

The medicinal use of mushrooms in Asian culture is widely known, but what is less known is that some of the most potent Asian medicinal mushrooms grow wild in Ireland too. It is only recently, as pharmaceutical companies begin revealing their research into the anti-cancer, antiviral, anti-inflammatory and anti-diabetic properties or otherwise of the mushrooms that grow all around us, that the general public is taking notice.

We’ve all seen turkey tail mushroom, whether we know it or not. It’s a small, frilly brittle fungus that grows like a bracket out of rotten wood, even on old park benches and dilapidated fences.

It’s ringed with semicircular bands of color like the plume of a turkey’s tail. In Japan, it’s known as Kawaratake and is given to all chemotherapy patients because the polysaccharides within it can, it is claimed, prevent cancer cell growth, while simultaneously boosting (and modulating) the immune system, and reducing the side effects of chemotherapy and radiation. The US Food and Drug Administration (FDA) has shown its efficacy against advanced prostate cancer, and other trials have shown impressive results on lung cancer. 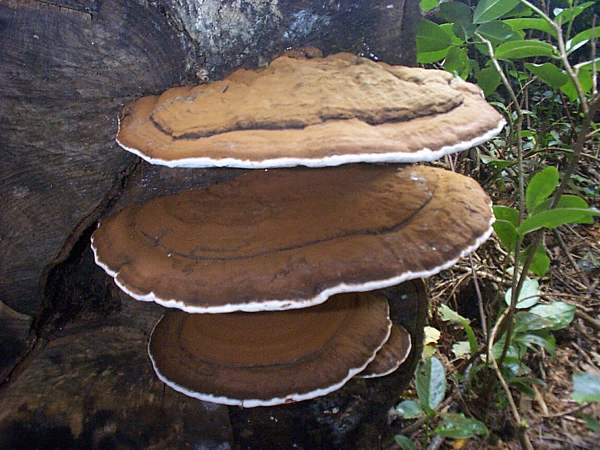 The second most common Irish polypore (or bracket fungus growing from decaying wood) is an artists’ conk (Ganoderma applanatum) with a brown and furrowed top and a white underside that turns dark when pressed. Its whiteboard-like underside gave it its name, as people used to draw on them, including the teachers of hedge schools long ago. It, too, has played a core role in Asian traditional medicine for millennia, although its close relative, reishi (Ganoderma lucidum), gets the most attention. Both reishi and artists’ conk have been shown in clinical trials to have potent anti-tumor, antibacterial, anti-inflammatory, and anti-fibrotic properties. The Ganoderma family is the focus of particular fervent attention by the pharmaceutical giants as they race to extract and synthesize the core constituent elements so that they can patent and profit from these powerfully medicinal plants that have served humanity for eons.

So, who in Ireland is taking advantage of those potent medicines lurking in our woodlands? Mostly, it’s herbalists, though many will use commercial extracts rather than foraging fresh mushrooms in the wild. 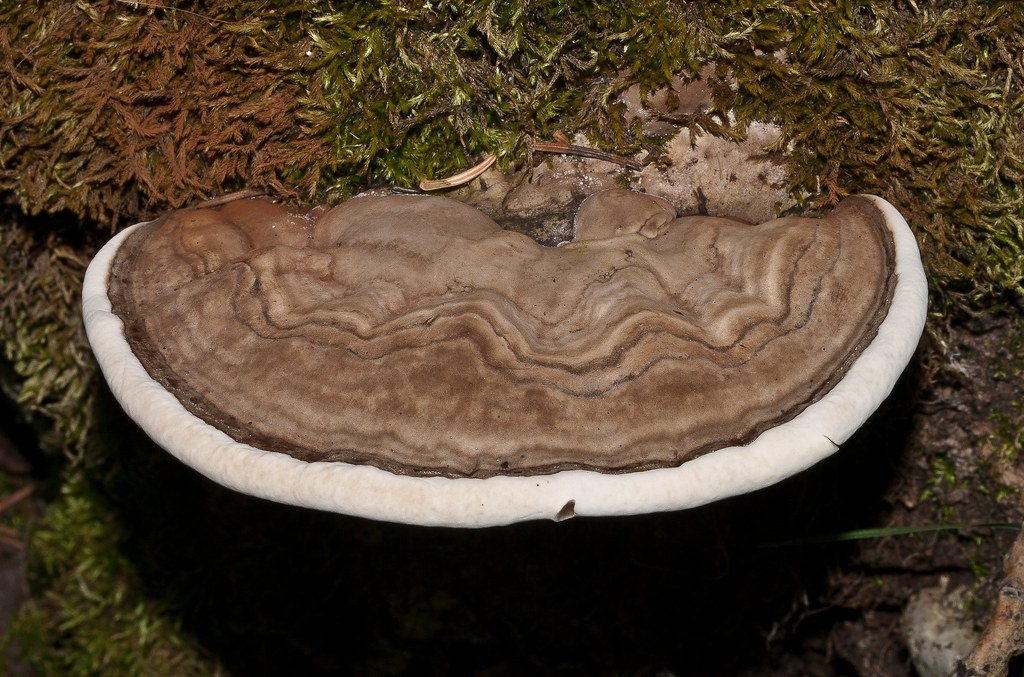 AnneMarie Reilly, who runs the Lismore Clinic in Waterford, uses medicinal mushrooms frequently in her practice: “Hen of the Woods, or Matake, grows around here and has been proven as a really useful anti-cancer remedy,” she says. “In clinical testing, it has been found to act in synergy with chemotherapy, to increase its effects, to lengthen survival rates and reduce the harmful side effects of chemo. I use reishi a lot too because it’s excellent at lowering blood pressure and cholesterol. It also has antiviral capabilities and modulates the immune system, and is an ideal anti-inflammatory, particularly for people with allergy or auto-immune type problems.

“Consultants often tell patients not to take anything else, and they get frightened into toeing a very orthodox line – though, in fact, mushrooms and herbs have been shown to interact in very positive ways with chemotherapy. They increase survival times; they reduce side effects. Frequently, the chemotherapy will cause people’s blood cells to drop too low to continue treatment, but that tends not to happen when they are taking mushrooms and herbs, and so they can get through it quicker.”

This type of knowledge is continually expanded in scientific research trials, though rarely by the pharmaceutical industry who have made it clear it is not in their interest to research mushrooms in their raw state, instead of as specific extracted compounds which can be synthesized in the lab, patented and profited from.

To get a sense of how fervid the scientific interest is at present here is just a tiny sampling of some results published in late 2017: the University of British Columbia showed the anti-proliferation, immune-stimulating and anti-inflammatory ability of artists’ conk; the Institute of Rural Health in Poland found that ceps could stimulate the production of natural killer cells (NK); Punjabi University demonstrated the anti-diabetic activity of oyster mushroom to lower blood glucose levels to normal; the University of Palermo showed truffles’ antibacterial ability to combat Staphylococcus aureus; while a university in Serbia showed the ability of porcinis to inhibit MCF-7 hormone proliferative breast cancer.

For Vilma Matuleviciute, a herbalist originally from Lithuania, who has been here for 20 years, the tradition of using mushrooms goes back to her childhood, when she would forage in the woods for over 15 different types of mushrooms. “In Ireland, people, in general, are afraid of mushrooms, and they shouldn’t be. Everyone should be able to recognize at least 10 different varieties that grow locally. I use mushrooms regularly as part of my herbal treatments, mainly reishi, fu ling, Coriolus, Chaga, and cordyceps, but Irish ones too, such as turkey tail and artists’ fungus. I also prescribe edible mushrooms, like shiitake and maitake, to my patients.”

Matuleviciute tends to use herbs more than mushrooms in her clinic, (Craigmore Clinic in Blackrock, Co Dublin), though she says, “Mushrooms are particularly good for immunity and resistance, as well as being antiviral and antibacterial. I use them for more chronic conditions, or when things like respiratory infections aren’t clearing up. We’ve seen really strong bugs in the last few years, which have been immune to antibiotics, and mushrooms can be great for tackling these and other chronic respiratory conditions, like bronchitis and asthma.

“Unfortunately, we’re getting many more cancer patients coming through all the time, and thankfully oncologists are becoming increasingly open to alternative medicine, allowing mushrooms and herbs to support the patient through chemotherapy. So far, I’ve had hardly any negative response from doctors.”

Matuleviciute would like to see Irish people becoming more familiar with the mushrooms around them, or at least not being frightened of them. She teaches courses in naturopathy and herbal self-care and will sometimes instruct patients to make their own tinctures or decoctions of specific mushrooms.

As science realizes that we are composed more of microbes, bacteria, and fungi than of human cells, it makes sense to turn to these complex bacterial systems that mediate so much of the biological interaction on this earth. A mushroom is simply the fruiting body of a vast multi-kilometer-long mycelium network that can extend throughout an entire woodland. The challenge now is to convince oncology departments to allow these mysterious natural substances that haven’t been packaged and commodified by the pharmaceutical industry into their spheres.

Why don’t you make your own Mushroom Tonic?

If you do want to make up an immune-boosting tonic or a more concentrated mushroom tincture to help someone through chemotherapy limit yourself to the three Irish mushrooms that are easiest to identify: turkey tail, artists’ conk and birch polypore, (which looks like artists’ conk, but is white and grows on birch).

Foraging for these is safe as there are no poisonous lookalikes. To make a tonic, simply chop up two handfuls of mushrooms and simmer in a liter of water for a few hours to release the potent polysaccharides within.

Then, to extract the equally beneficial triterpenes, statins and sterols pack the sliced up mushroom into a jar and cover with vodka for a few weeks to make a really potent tincture that can be used just a few drops at a time.

The Antibacterial Properties of Ganoderma Lucidum

Benefits of Ganoderma Lucidum for Some Diseases